The Waltz of Devil’s Creek by Justine Carver Book tour and Giveaway! 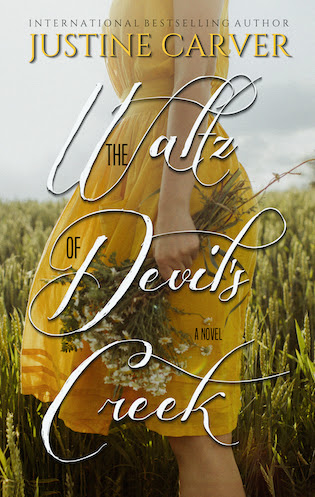 Judith Campbell is dying, and she cannot take the painful truth about where her son came from to the grave with her. While on her deathbed in Atlanta, Georgia in 1994, Judith tells him the tragic story of his conception, and which of two men his birth father could be: the young man who professed his love to her, or the pastor who assaulted her.

Set in the Deep South in 1947, The Waltz of Devil’s Creek digs into the dark crevices of racism and women’s rights during a heated political climate in an era of segregation. Combined with Judith’s lack of social stature, and at a time when reporting sexual assault was unheard of, every injustice is stacked against her from the very beginning.

But there is a light in Judith’s young life: her best friend, Joseph Bird, who has loved her since childhood. Joseph stands up for Judith when no one else will and proves that even in the darkest of times, a light is always burning.

The sound of trickling water hit the floorboards beneath me; I sucked in a sharp breath and froze.

Joseph’s eyes strayed downward; his brows crumpled in his forehead, and he gawked at me like I’d grown a third eyeball. “Are you…peein’?” he asked as if he couldn’t believe such a thing.

“No…I uh…” I couldn’t get the words out, but I sure knew what was going on. I gripped my belly with both hands and sat down on the edge of the bed, fluid dripping down my legs—I’d swore I’d never wear a dress again, but I couldn’t fit into pants anymore. “I think I’m gonna have a baby now, Joseph.”

His eyes darted back and forth from my face to the puddle on the floor; he looked as white as the sheet I’d just dressed the bed with.

“Joseph, remember what we talked about,” I said, stopping him in his tracks. “You can do this.”

“I remember a brief conversation about who’s gonna deliver this baby,” he said with sarcasm. “But I also remember tellin’ you ain’t no way in hell I can do it. You gotta go to the hospital.”

The first wave of pain struck me like somebody done hit me across the lower back with a two-by-four. “Ahh! Oh no, Joseph, this…ahhh!” I gritted my teeth so hard that pain shot through my jaw and into the top of my head. “I can’t go to the hospital…please, you promised.”

“Yes, you did! You said: ‘I swear on my life I’ll deliver the baby if nobody else is around to do it’—can’t go back on it now.”

He threw his hands up in the air. “Well yeah, I may’ve said that, but it was only to get you off my back about it—I can’t deliver a baby!”

“You’re gonna have to!” I cried out in pain again and fell back against the bed; I didn’t know why, but for a moment, I thought about how I’d just made the bed and was annoyed by the awful timing.

I heard my pa’s voice from the doorway—he was like the dead arisen, as I hadn’t heard him say much in so long. I clamped my jaw down again, eyes closed so tightly I saw spots dancing on the inside of my eyelids.

Justine Carver was born and raised in the Southern United States on a heavy dose of creek-wading, lightning-bug-catching, and Saturday morning cartoons. She is a full-time writer, all-the-time reader, and every now and then, she pulls her head out of the clouds long enough to remember how much better it is up there.